Now I’m not a doctor, but I don’t recommend climbing on trees to receive a miraculous healing.
If you’ve seen this movie’s trailer, you’ll know what I’m talking about.

This is my review of Miracles from Heaven! 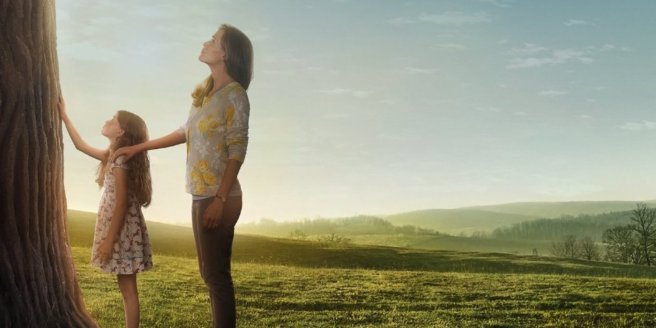 Christy Beam (Jennifer Garner) lives a nice life in Burleson, Texas with her husband Kevin and three daughters, Abbie, Anna and Adelynn (someone really likes the letter “A”). Things are fine and suburban until Anna starts experiencing serious stomach issues, which keeps getting misdiagnosed as acid reflex or lactose intolerance.  As poor Anna’s stomach swells, it is soon discovered that she has what is called Intestinal Pseudoobstruction; it basically means that she can’t digest food and is quite literally starving to death. Against all odds, the determined Christy will stop at nothing to get the proper treatment Anna needs.

The Hits
The people in this movie ACTUALLY act like real people!   You know how in a lot of Christian films like God’s Not Dead 1 & 2 or Christian Mingle the Movie, where you have the jerk atheist characters and the pure-as-pearls Christian characters?  With the exception of one stubborn intern who tries to brush off Christy’s concerns, all of the characters feel like real human beings in a real-life situation.  Nobody goes on expository spiels or launches into Biblical quotation mode; all of the dialogue and interaction are grounded in reality.  Jennifer Garner brings to the film a fierce and genuine performance as Christy.  This is an ordinary woman thrust into the nightmare of not knowing what is making her beloved daughter suffer greatly.  There’s one scene in particular where she’s tearfully describing Anna’s condition to the front-desk secretary at the children’s hospital and Garner’s quivering voice convey the depths of her broken heart.
Jennifer Garner and Kylie Rogers have believable chemistry as mother and daughter.  Not only do they (somewhat) resemble each other, but they play off of one another very well.
Speaking of which, Anna actually acts like a real kid!   Yeah, unfortunately, Hollywood screenwriters have forgotten how to write child characters.  Often times they either write them as mindlessly innocent or painfully obnoxious.  Between this film and The BFG, I’m finding more reasons to have hope in Hollywood’s ability to write children as people, not as caricatures.  Also, kudos to this film for tackling depression in children with so much tact.  There’s one scene where Anna confronts her mother with the very real possibility of her own impending end and it is heartwrenching to watch.
I appreciate how God’s involvement in the characters’ lives is kept in the background, because essentially that is how God Himself operates; behind the scenes in the silence.  By hinting at His handiwork instead of spelling it out, it reinforces that God is a gentleman, not a show-off.  He works not with roaring voices and clamor, but through gentle whispers, calm inspirations and quiet subtlety.  If you’ve ever wondered how the old adage, “The Lord works in mysterious ways” plays out in real life, I think this movie is a good demonstration of the adage.

The Misses
Like the Theory of Everything, this movie can be very hard to watch, primarily the hospital scenes.  One scene shows the doctors sticking a tube in Anna’s nose and her resistant whimpering had me bawling like a baby.  There are quite a few hospital scenes that are so realistic that it can be tough to stomach.  This is one of those movies where if you have or are currently caring for an ill relative, in particular a child, this might hit too close to home for you.  Granted, you may have a different experience watching this movie than I did, but

The Christian film genre could definitely benefit from more films like Miracles from Heaven.   Once Christian filmmakers focus less on bashing atheists and more on showing God’s subtle workings in the modern world, the genre will have better days ahead. Miracles from Heaven treats its characters with humanity, has a stellar and determined performance from Jennifer Garner, and illustrates that God’s miraculous doings come not as lighting or spectacle, but in the form of kindness from strangers and the bond of family during the darkest of times.

Saint Anne, pray for us.