Now we get to the film that had to live up to the awesomeness of Empire Strikes Back.

This is my review of Star Wars Episode VI: Return of the Jedi! 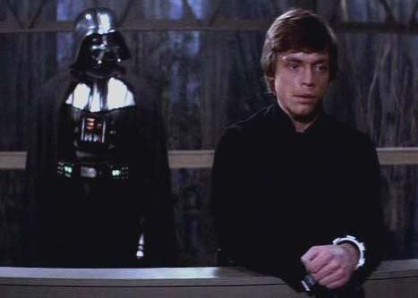 The Galactic Empire has begun constructing on a second Death Star, one that will be more powerful and deadlier than the first one.  Upon completion, this second Death Star will crush the rebel alliance once and for all.
After learning that the most evil man in the galaxy is his father, Luke Skywalker has returned to his home planet Tatooine to rescue his friend (and coolest character ever) Han Solo from crime lord Jabba the Hutt and he has Leia, Lando, C-3PO and R2-D2 helping him along the way. All the while Luke must find a way to save his father’s soul and bring him back from the Dark Side.

Before I begin, I would like to thank you, the reader, for your patience.  My day job has kept me busy, which is why it is taking a while for me to review these movies.

The Hits
Okay, I just love that the first character we start off the movie with is Darth Vader.  I will always get shivers down my spine every time I see him walk down a hallway or off of a ramp.   Interestingly, the revelation that he is Luke’s father makes me see him in a new light.  The fact that this sinister character was once capable of loving another human being (Padme Amidala) and creating new life with her is quite chilling.
Hey fellow Star Wars fans, I ask you: When Luke is trying to bargain with Jabba, have you ever noticed how he is wearing a black hood and cloak, as well as saying things that you would normally hear Darth Vader say?  For me, this is both disturbing and brilliant.  It shows how similar Luke and Darth Vader are without ever compromising Luke’s character arch.
Speaking of Luke and Darth Vader, the best and most complex scenes in this film are the ones with those two.  Luke confronting Darth Vader on the bridge is by far the most depressing scene in any film.  I say depressing because it’s clear that Darth Vader is too far gone, yet it is admirable to see Luke give it everything he’s got to try to bring his father back to the light.  My heart sank when Darth Vader said, “It’s too late for me, son.”  I can tell you that from experience, I know that when someone says that, it truly is too late.
I absolutely love the internal conflict that plays when Luke is watching the rebel ships being ambushed.  How Palpatine taunts him, tempts him [Luke] to strike him with his Lightsaber; what I adore is how Palpatine urges him to kill him out of anger and hatred, not for the sake of righteousness.  I love how Luke’s innate goodness shields him from the lure of the Dark Side.   The internal conflict ignites once Darth Vader discovers that Luke has a twin sister, forcing Luke to fight his father to protect those he cares for.  Yes, I did cry when Luke took off Darth Vader’s mask and the father got to get a good look at his son for the first and last time.

The Misses
Please tell me I’m not the only person who finds Jabba’s Max Rebo Band annoying as all heck.  I have no issue with taking time to establish a sense of place, but the look into Jabba’s lair goes on for too long.
Okay, can we talk about Emperor Sheev Palpatine’s plan?   Him trying to turn Luke over to the Dark Side is not my issue.  This is my issue: Long-term wise, does Palpatine plan on replacing his apprentices over and over until the end of time?  So he wants to make Luke his new servant by having him turn to the Dark Side and kill off his current apprentice Vader, but then how does he plan on acquiring new apprentices?  Let’s assume for a minute that Luke were to turn over to the Dark Side and kill his own father like Palpatine wanted.  I assume that Palpatine wouldn’t allow Luke to have children of his own, so would Luke just be his apprentice or would Palpatine readily replace him?  Also if Luke is the last Jedi, how would he have gotten his own apprentice if said apprentice would have to be a Jedi?
I guess in hindsight, these questions are pointless given that Luke resisted the Dark Side and now Palpatine is dead, but I wouldn’t be a movie reviewer if I didn’t raise these kinds of questions.

Going into this third film, I thought Empire Strikes Back was my favorite Star Wars movie.  However, after watching it, Return of the Jedi is my favorite film in the original Star Wars trilogy.  The emotional struggle between Luke and Darth Vader is mesmerizing to watch, the supporting characters are lovable and memorable as always, and Mark Hamill’s evolving performance brings Luke Skywalker’s character full circle.

Saint John the Baptist, pray for us.

BONUS FEATURE!
Enjoy this animation from How It Should Have Ended!