Yes, we are going there.  Just as I reviewed the original trilogy, I will also travel to the Dark Side of the saga:
The Prequel Trilogy.

This is my review of Star Wars Episode I: The Phantom Menace! 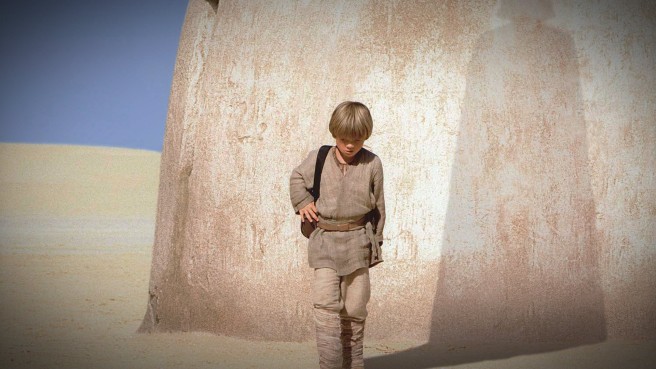 Okay, so given that halfway through the movie, I found myself having no idea what the heck was going on, I will summarize it the best I can.
Young Obi-Wan Kenobi and his master Qui-Gon Jinn are on a trade negotiation mission because–potatoes–and things don’t go so well, so they have to rescue the teenage Queen Amidala and hide her on the remote planet of Tatooine, where they encounter a boy named Anakin Skywalker.  Through a blood test, Qui-Gon discovers that Anakin’s (irritable sigh) midichlorian count is higher than even Master Yoda’s and so begins the origins of the boy who would go on to become the most iconic villain in cinematic history, Darth Vader.

I cannot believe that this crummy movie is a part of the Star Wars universe.  Sure, the original trilogy had hocky special effects and some okay dialogue, but it also had a good story, likable characters and, of course, an engaging internal conflict between Luke Skywalker and his evil father Darth Vader that is so rich in development and complexity that I could do a whole CGB editorial on those two guys alone.
What does Phantom Menace have in comparison?
Well, let’s just get on to the review.

The Very Few Hits
Fine, I’ll say it.  The Podracing scene is fine.  It does very little to move the narrative, but hey; something is happening.  Yes, the duel of the fates sequence is also fun to watch.  It’s devoid of emotion and significance, but again, at least something is going on and it’s not bogged down by expositional speeches and trade negotiations.
To be fair, I did sort of like the friendship between Anakin and Padme.  I can see where George Lucas was going with that and Natalie Portman does the best that she can.

The Plethora of Misses
In my reviews for Empire Strikes Back and Return of the Jedi, I had so much to say about the evolution of Luke and Darth Vader as father and son.  I could have gone on for hours about the peaks and valleys of their relationship.   Why?  Because both are well-written characters portrayed by capable actors.  Because the idea of having a protagonist offspring go up against their antagonist parent is interesting and full of depth.
In contrast, I have absolutely nothing to say about any of the characters in Phantom Menace.  Character evolution is traded for expositional speeches.  The people talking are just pawns with the sole purpose of explaining to plot.  The only relationship I kind of care about is the one between Qui-Gon and Obi-Wan.  I say “kind of” because they don’t spend enough time together.  They only have a handful of Jedi fights together and when they’re not fighting, they’re just spouting off exposition.  Yes, Liam Neeson and Ewan McGregor are enjoyable to watch, but even a great actor can’t make terrible dialogue compelling to listen to.
I did like the Duel of the Fates somewhat, but what kept it from being epic is that there’s nothing emotional about it.  In Empire Strikes Back, you could feel Luke’s anxiety as he fights Vader for the first time.  You could sense the conflict within Vader as he dukes it out with Luke all while trying to keep his son alive.  Once the big reveal comes, it puts Vader in a new light as a man consumed by darkness and can only be saved by his son’s goodness.  I adore Return of the Jedi because the philosophical and spiritual conflict between Luke and Darth Vader comes to a boiling point.  It becomes a battle for the souls of both characters.
In the duel of the fates, there’s no emotional depth to be found.  Even when Darth Maul kills Qui-Gon, it happens too quickly for me to care and there’s no enough time for Obi-Wan to convey the kind of hatred needed to get the audience invested.
Jar Jar…OH. MY. GOSH.  I’ve always known that Jar Jar is the most despised Star Wars character, but now I understand.  I see now why this alien squeak toy whose dialogue I can barely comprehend and who has the IQ of a stick of butter is loathed by the majority of Star Wars fans. Yet, as much as Jar Jar makes me want to stick a fork in my eye, I can’t place all of the blame on him because he is a victim of bad writing.  C-3PO was written to be annoying, but all three films in the original trilogy gave him a reason to be uptight and anxious about everything.  Also annoying characters are watchable when they have another character to play off of.  R2-D2 put C-3PO’s annoyance into perspective; R2-D2 was the straight man to C-3PO’s Debby Downer persona.  Jar Jar has no straight man to set him straight, so he is a screw-up character who never gets his comeuppance, making him unlikable at best and insufferable at worst.

Good Lord, Phantom Menace is difficult to sit through.  How this boring, not-engaging chore of a film has anything to do with the awesome Star Wars universe is mind-boggling to me.   Now if you’ll excuse me, I’m going to go suffer through Attack of the Clones.

Saint Catherine of Alexandria, pray for us.