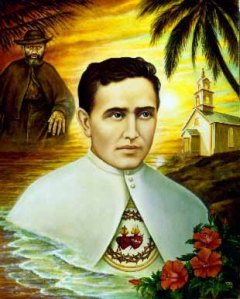 So in the 1800’s, Hawaii had a bigger crisis on its hands than being the backdrop of a terrible movie (Aloha); it was facing an outbreak of Hansen’s disease, also known as leprosy.  Once you got leprosy, you were a goner.   However our story begins in Tremelo, Belgium, with the birth of a little boy named Joseph de Veuster on January 3rd, 1840.  All that is known about his childhood is that he had to quit school when he was thirteen-years old so that he could work on the family farm.   However, he was able to go to college in Braine-le-Comte, and later entered the Congregation of the Sacred Hearts of Jesus and Mary at the age of eighteen.   In many respects, no one was really surprised.  Both of his sisters, Eugenie and Pauline, were nuns.   His brother Auguste became Father Pamphile.  For Joseph, religious life was in his genes.  On October 7, 1860, he received the name Brother Damien.  At first his superiors thought an uneducated farmer boy was unqualified, but then they learned that his brother had taught him Latin. Yeah…talk about an awkward moment.  #jokesonyoumybrothertaughtmelatin
Damien felt a strong calling to be missionary and prayed for an opportunity to answer that call.  Then his brother got sick and couldn’t go on his assigned mission to Hawaii, so Damien basically volunteered as tribute and took his place.  He hit the road to Honolulu in 1864.  He was ordained into the priesthood two years into his stay.

Imagine moving into a new neighborhood only to find that neighborhood in chaos. That was Damien’s arrival to Hawaii was like; a colony in disarray ruled by a ruthless disease.  The island of Molokai was the leper drop-off station; when you got leprosy, you were shipped off to Molokai.  Damien wouldn’t get to Molokai until nine years later.  He had been working on missionary assignments throughout Hawaii and reached Molokai in 1873.  He was part of a team of four other chaplains, but was the only one of the group who chose to stay permanently in Molokai.  Every missionary assignment had led up to this, and he knew this was the place God had called him to.

Damien became a champion of the segregated lepers.  He advocated government assistance on their behalf.  He said last rites to the dying, baptized infants whether they had contracted leprosy or not, and was responsible for the construction of hospitals, clinics and churches throughout the leper colony.  The children could go to school, and those who had lost their parents to leprosy had an orphanage for refuge.  All of this because of Damien’s efforts and advocacy.  To put it simply, the man got things done.

One day in 1885, he had stepped into some water and noticed that he couldn’t feel the water against his skin.  That is one of the signs of leprosy.  His time was drawing near.  Nevertheless he spent his final days serving the lepers and giving them a better life until his body could take no more.  Damien died on April 15, 1889.

The core of Damien’s character was mission.  He was born with a sense of duty and became a man on a mission to be the face of Jesus to the outcasts.

Saint Damien of Molokai, pray for us. 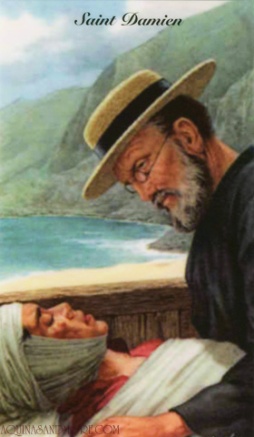