I wonder if holy water would’ve worked on Pennywise.  I guess I’ll try it out the next time I see a killer clown while grocery shopping.

This is my review of It! 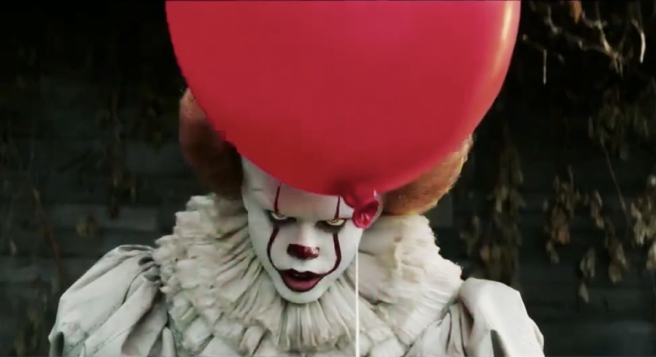 Based on both Stephen King’s novel and the 1990 miniseries of the same name, It tells the story of the Loser’s Club, a misfit group of outcasts who begin experiencing frightening apparitions and visitations from Pennywise, a demonic killer clown who has been terrorizing Derry, Maine for thousands of years.

The Hits
The kids are the heart of this story and these child actors are absolutely fantastic!  Their chemistry with one another is impeccable; I could believe that these kids would hang out at a Starbucks after school together.  While it is uncomfortable to see twelve-year olds dropping F-bombs, I honestly prefer that over cheesy phrases that no kid would ever say.  I like how they don’t go into long diatribes about their friendship.  Their bond is shown to us through their actions and decisions as a group, how they come to each others’ rescue whenever one of them is reeling from an encounter with Pennywise.  Much like the first Alien movie, this film spends its first hour fleshing out Bill, Stan, Ben, Beverly, Eddie, Richie and Mike and establishing them as friends through circumstance.  You get the sense that it is in being rejected by others that they have come to accept one another.
All right, let’s talk about Pennywise because, by God, how can you not talk about Pennywise?!  Bill Skarsgård nails it as Pennywise.  Gone is the witty banter of Tim Curry’s interpretation of Pennywise.  This Pennywise is basically a Machiavellian demon, one who rules his chosen targets by presenting himself as their worst fears made manifest.  After we meet him in the film’s first eight minutes, the movie then proceeds to build up the terror of anticipating his unpredictable presence rather than having him screech at the kids in every single scene.  He is featured more prominently in end of the second act and the entire third act, but for the first hour and a half, he’s like the Fire Lord in Avatar: The Last Airbender; shrouded in mystery and kept in the shadows with a single red balloon being his calling card.
What keeps the Pennywise apparitions from becoming too repetitive is that they are used to establish the worst fears and darkest memories of our protagonists.  Bill is forced to revisit his guilt over Georgie’s death when he follows Pennywise (disguised as Georgie) into his flooded basement and faces not-Georgie, who is wearing the same yellow raincoat he was last seen wearing on the day of his death.  Mike’s first Pennywise encounter comes to him in the form of burning hands trapped behind a door, a gut-wrenching representation of the family he lost in a horrific fire.  These scenes are critical to the character development, as well as for getting a sense of Pennywise’s possible omniscience and immortality.  I really wonder if this is what it would look like if God actually gave Lucifer a free hand.  Luckily the old serpent can’t do squat without God’s permission, and after seeing this movie, I’m most certainly glad that’s the case!
Speaking of which, I would like to say that while this is a secular film, it would not be far-fetched to call this an unintentionally accurate portrayal of what it is like to deal with spiritual attack.  Not so much the over-the-top scares, but in the depiction of the unnerving reality of being bullied and harassed by evil.  Granted, this isn’t a de facto story of spiritual warfare, but I do feel that those who do work in that field (such as those involved in deliverance ministry and maybe even exorcists) could benefit from watching this film.  Spiritual attacks certainly make life challenging, but they can also serve as a wake-up call to run to Jesus if you’ve been moving away from Him for a while.

The Misses
There’s this really unnecessary love triangle between Bill, Bev and Ben (try saying those three names ten times fast) that the filmmakers do try to develop, but it ultimately falls flat because it’s just a distraction from the main plot.
Speaking of Bev, she has this reputation of being promiscuous, even though we see that it’s not the case at all.  This point is hand-fisted throughout the film.  Now while I am glad that slut-shaming is addressed in this film, it gets tiresome by the fifteenth time a character throws an accusation of promiscuity in Bev’s face.  There’s a more subtle way to write slut-shaming into your movie, and I hope filmmakers learn how to do so.
The very end of the film features the kids basically making a blood pact that they’ll return to Derry if Pennywise returns.  Yeah, I felt that was a bit much.  Hey, guys, I think a verbal agreement would’ve been just fine, but what do I know?  I guess being stalked by a killer clown can make you resort to extreme measures.

Overall It can certainly be called a crowd-pleasing horror flick.  This movie is like Deadpool in that it’s better watched with a group of friends at a midnight screening.  Fortunately even if it weren’t a midnight movie, the script is well-written and stands on its own two feet.  Add to that the stellar performances of Bill Skarsgård and the child actors, and excellent directorial work from Director Andy Muschietti, and you’ve got yourself a Stephen King adaption worthy of the hype and applause it has received.

Saint Padre Pio of Pietrelcina, pray for us.

Given that the new It film is immensely dark and heavy, I thought it’d be fun to add the Nostalgia Critic’s review of the 1990 miniseries “It” as a bonus feature.  🙂