This is my review of The LEGO Batman Movie! 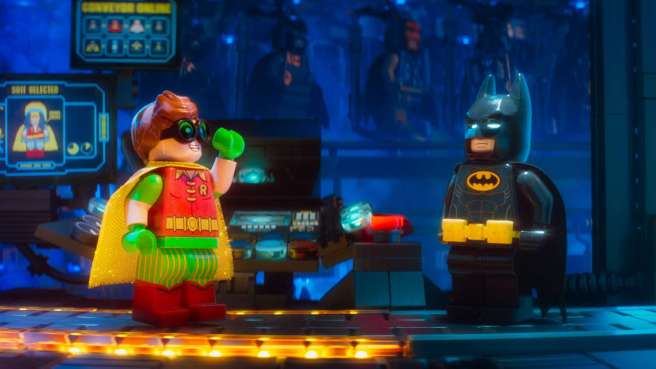 Three years after Emmet and company rescued LEGO…city, I guess (the main location never really had an established name)…Batman (Will Arnett) is continuing his crusade against crime in his beloved Gotham City.  However, his “I-don’t-need-nobody” attitude is starting to get the best of him and is beginning to harm the few interpersonal relationships he has.  His isolated world is turned upside when, after sarcastically “promising” to adopt the sweet orphan boy Dick Grayson (Michael Cera), Dick is welcomed into Wayne Manor by Alfred (Ralph Fiennes) and is taken in as Bruce Wayne’s/Batman’s adoptive son.  Along with unintentionally becoming a foster parent, Batman also has the Joker (Zach Galifianakis) and his evil plan for complete and total world domination to worry about.  Oh, and he has a crush on now-Commissioner Barbara Gordon because why not?  Luckily their relationship is handled WAY better than it is in the Killing Joke adaptation.

Anywho, before any fans of the Killing Joke get angry at me, ONWARD with the review!

The Hits
Once again, the self-aware comedy is top notch!  There are a lot of really clever and incredibly funny jabs at past Batman incarnations and DC comics in general.  As with the last film, LEGO Batman is superbly animated.  The amount of detail to each frame and dedication to making every LEGO piece move smoothly will never cease to amaze me.
Will Arnett’s Batman was one of the best parts of the already-awesome LEGO Movie and he totally delivers here in his own solo flick!  His LEGO Batman is a bruiting, egocentric man-child…and yet there is a complexity to him which comes in the form of his inability to cope with the death of his parents even after all these years (and adaptations).  Within his character arch is a great self-sanctification message; as the story goes on, Batman slowly but surely puts his own ego and desires aside for the good of Dick Grayson, Barbara Gordon and eventually all of Gotham.  The climax features a great moment of humility and self-denial from Batman, which is a much-needed lesson to both kids and adults alike in our entitled society.  Dick Grayson, aka Robin, is so adorable in this movie.   I like how he’s actually a teenage boy and not a twentysomething college fellow; it makes his innocence and whacky antics more endearing.  Also BRAVO to the film’s pro-adoption message!  By golly, we need all the positive examples of adoption we can get.
Now I’ve never been an avid reader of the Batman comics, but even as an outsider looking in, I can safely say that the portrayal of Batman and Joker’s rivalry here is the best I’ve seen since the Dark Knight!  I like dark and gritty as much as the next guy, I do appreciate the satirical take on Batman and Joker’s animosity.  Batman and Joker have always been each other’s ying and yang, and that one just couldn’t exist without the other.  This movie not only acknowledges this, but EMBRACES it!   I’ve always known that Joker has carried a secret soft spot for the Caped Crusader (and by that, I mean that the Joker secretly never wants to kill Batman because doing so would be killing the one person who is actually a worthy match to fight, and for Mr. J, where’s the fun in that?) and the movie doesn’t go crazy with it by having the Joker be in love with Batman or anything.  It’s more of a “I-appreciate-you-as-my-rivaling-equal” kind of rapport.  I actually think it was quite a bold move to make Batman kind of a bad guy and have the Joker be the more likable of the duo.

The Misses
So there is a bit of a continuity error.  In the LEGO Movie, the elements like water and fire were made ENTIRELY out of LEGOs.  Here, however, Batman goes swimming in an earlier scene and the water is actually, well, water.  Yeah, I know it’s a nitpick, but it was just less funny to see ole Bruce swimming in liquid than in blue LEGO pieces.
The movie can be a bit overwhelming at times.  The pacing is 100% fast, nonstop with little breathing room.  Jokes are thrown at a rapid-fire speed and the plot does little to take a break.  I can literally count the quiet moments with my fingers–all two of them.  Granted, I know that this isn’t Arrival, which took its time, but some pauses in the narrative would have been nice.

As a huge fan of the LEGO movie, I give this solo LEGO Batman flick two thumbs up!   This is another wonderfully assembled, cleverly crafted picture by the master-builder filmmakers who brought us the first flick.  Knee-slapping satire, colorful characters and positive messages of sanctification, friendship and adoption makes the LEGO Batman Movie a neon-colored treat for the whole family!

Saint Pelagia, pray for us.