I’m just gonna say it; this movie was kind of a chore to get through.

This is my review of Bridge of Spies! 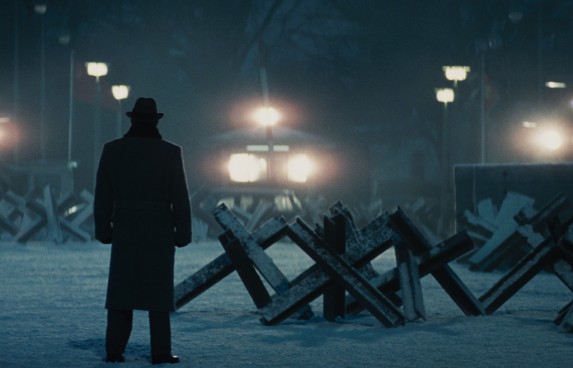 The year is 1957.  At the height of the Cold War, the US of A and the Soviet Union have both sent spies after one another.   When the reserved, seemingly harmless Rudolf Abel (Mark Rylance) is taken into custody by FBI agents, an insurance lawyer named James B. Donovan (Tom Hanks) is recruited to defend Abel under the guise of receiving a fair trial to prevent anti-American propaganda from the Soviet Union.

As a cinephile (a lover of all things cinema), I have great respect for director Steven Spielberg.  His dedication to his craft and prolific filmography are admirable.  This is the reason why I’m sad to say that Bridge of Spies is a competently-made, by-the-numbers disappointment.

The Hits
Mark Rylance’s Rudolf Abel is by far the most interesting character in this film.   Calm, measured and unflinching, Abel is a chameleon of a man who looks so unassuming and bland that it becomes unsettling because you never know if he is who he says he is.  I love how he maintains a sense of control even when the situation surrounding him has robbed him of all control.  I really hope that Mark Rylance gets to play a Keyser Söze-type villain someday.  I could see him as that pleasant guy who lets you into his home during a snowstorm only to stab you in the back the second he closes the door.
Tom Hanks and Mark Rylance have very good chemistry.  Their short scenes together are enjoyable to watch and I like the friendship that forms between the two characters.
There is an intriguing scene that shows an American student and his German girlfriend trying to cross the newly constructed Berlin Wall.  It’s only ten minutes long, but their subplot would have made a far more interesting story.

The Misses
This is a really boring movie.  I’m not kidding when I say that I dozed off three times during the flick.  In this Oscar bait drama about the Cold War, there’s very little to get invested in.   The cinematography is fine but unimpressive, the musical score is forgettable and even the costumes are dull.  Except for Mark Rylance, everybody else is kind of phoning it in.  Tom Hanks is just saying lines and looking concerned, providing little to no depth to the character he is playing.  Then again, it doesn’t help that there isn’t much to the protagonist himself.  I actually had to scroll back up to this review’s intro because I already forgot his character’s name!
Bridges of Spies has what I call “third party syndrome,” in which the first half focuses on two opposing forces (in this case, US versus the Soviet Union) and then somewhere in the second act, Germany gets involved and now we’re supposed to care about this third party that wasn’t well-established as a present foe.   Add to the fact that the story itself lacks innovation and you’ve got yourself a well-made, but dull film.

I’m just going to stop here.  Bridge of Spies is not one of Spielberg’s best works.  If the movie had focused more on Rylance and Hanks’ friendship and/or just made Rylance the main character, it would have been more emotionally-involving.  As it is, Bridge of Spies is a fine but bland snooze.

Saint John Eudes, pray for us.