Merry Christmas, CGB fans!  Boy, do I have a present for you!
Well, we’ve made it.  We had to get through two crummy prequels, but at last we’ve come to the third and final film in the Star Wars prequel trilogy. Will this one be better than the last two or will jerk Anakin drag another movie down with his childish complaints?

This is my review of Star Wars Episode III: Revenge of the Sith! 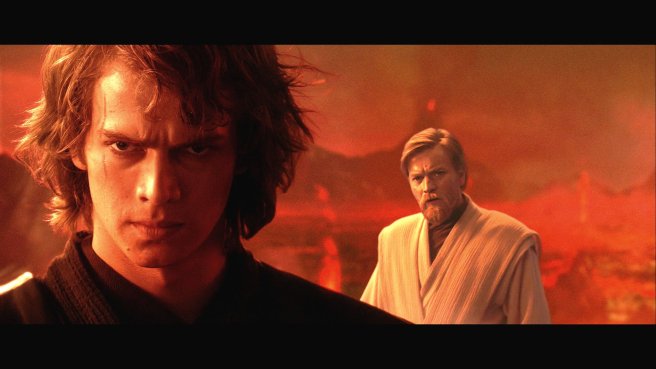 The film opens with Obi-Wan Kenobi and his apprentice Anakin Skywalker on a rescue mission to save Chancellor Sheev Palpatine from General Grievous and Count Dooku.  From there, a maturing Anakin learns that his secret wife, Padme Amidala is pregnant with his child.  Chancellor Palpatine begins to take Anakin under his wing and slowly but surely poison the young Jedi’s mind into giving in to the Dark Side, leading him on the path to becoming Darth Vader.

I will come right out with it: Fourteen-year old me loved this movie when it came out.  I saw it twice in theaters and it was the first time I had experienced the “good-guy-turning-evil” narrative as a teenager.
I will be turning twenty-four in five days, so let’s see if this Star Wars prequel still holds up for me as an adult.

The Hits
The first fifteen minutes are filled with promise.  Gone are the taxation talks and expositional drawls.  This time, we open with the kind of action that you would expect from a Star Wars film.
Finally we get some banter between Anakin and Obi-Wan!  They actually have a rapport that you would want to see between two friends.
The moment when Padme tells Anakin that she is pregnant is well acted.  With few words, Hayden Christansen and Natalie Portman express excitement, fear, anxiety and joy with their facial expressions.  Also I will give Anakin extra brownie points for his line to Padme, “Our baby is a blessing.”
The plot of this film is way simpler than the storylines of Phantom Menace and Attack of the Clones.  I could actually follow what was being said, what was taking place, who was fighting who and so on.
Okay, okay, I know that I spent a good chunk of my Attack of the Clones review bashing Anakin.  However I think Hayden Christiansen gives a pretty good performance here…when he doesn’t open his mouth.  He is quite expressive and can convey so much with just a simple knit of his brow or tightening of his lips.  This is the pre-Darth Vader Anakin that I’ve been waiting for; a troubled young man conflicted by his growing disillusionment with the Jedi, tormented over the possible death of his pregnant wife, and vulnerable to Palpatine’s deception.  A Shakespearean villain like Darth Vader deserves an origin story of the same caliber.  Good bye, whiny lustful Anakin!  Hello, complex tortured soul Anakin!
Finally, finally, FINALLY we get an emotional Lightsaber duel between Anakin and Obi-Wan!  One of the biggest problems with these prequels is that the Lightsaber duels severely lacked the internal battle of the characters fighting.  Where the Lightsaber fights in Empire Strikes Back and Return of the Jedi were rich with depth and drama between Luke and his astray father, the battles in Phantom Menace and Attack of the Clones only had stylized choreography and obstacles, lacking the tension needed to make the audience emotionally invested.   In Revenge of the Sith’s climactic confrontation, you can hear Obi-Wan’s heart break with each swing of his Lightsaber while the surrounding lava and brimstone reflect the hatred and rage boiling within Anakin.

The Misses
Am I the only one who feels that Palpatine’s interest in Anakin is a bit too abrupt?  I kind of wish that the last two films had establish some kind of rapport between Anakin and Palpatine so that the friendship they form in this film would feel more natural.  It’s like he had little interest in Anakin in the last two movies and now that we’re at prequel #3, he’s suddenly taking Anakin under his guidance.
Okay, I’m really getting sick of this in movies: Other characters keep telling Anakin that he’s a great Jedi, but honestly he hasn’t done anything different from any other Jedi.  His fighting skills aren’t different, he can do the same things that his fellow Jedi do; other than his exponential midichlorian count (even now, that sounds so stupid), what exactly is Anakin doing that makes him so special?  Just because you have other characters telling me over and over that such-n-such is the best thing since sliced bread doesn’t make said character a special snowflake.

Guys and gals, it took two shizzy prequels to get here, but we finally have ourselves a satisfying conclusion to the Star Wars prequel trilogy.  Given that I love the Darth Vader character, I was quite pleased to see justice done with Anakin’s tragic tale.

Merry Christmas and Saint Ignatius of Loyala, pray for us.