Welcome back, Hits and Misses system!  (Check out the Theory of Everything review in order to get the reference).

This is my review of The Hunger Games: Catching Fire! 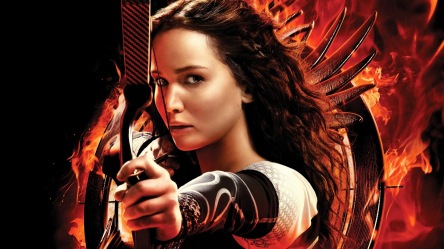 Catching Fire is the second installment of the Hunger Games trilogy.  Now-seventeen year old Katniss Everdeen and Peeta Mellark, two Tributes from District 12, have won the 75th annual Hunger Games.  However, the Capitol is eyeing them after the rather questionable way they emerged victorious.  This is the first time in Panem history that two Tributes have been allowed to live.  President Snow is especially suspicious of Katniss, who he believes orcastrated the suicide pact that led to her and Peeta walking out of the Games alive.  During Katniss and Peeta’s Victory Tour, the threat of civil war among the Districts blooms and Katniss is assigned by Snow to cool the rising flames of tension by convincing the Capitol that she and Peeta attempted suicide out of love for each other and NOT as an act of starting an anti-Capitol revolution.  Things get even worse when the Capitol issues a Quarter Quell, in which past living Victors are to fight to the death on live TV.  This means that Katniss and Peeta must return to the arena, and this time, only one will be allowed to walk away with their life.

Guys and gals, this is my favorite film in the franchise.  After the first film, director Gary Ross backed out and director Frances Lawrence took over.  The end result is the best Hunger Games film to date.  Now granted, the second book is regarded in the Hunger Games fan community as being the best book of the series, but I digress.

The Hits
Oh my gosh, this movie actually follows the book!  Where the first film practically rewrote the original narrative of the first book, Catching Fire the movie is almost identical to the second book.  Even the dialogue is pulled straight out of the book! I think I counted only five very minor changes.  I think the only notable change is that where the second book took longer with the Victory Tour and training sequences than it did with the actual Games, the movie shortens the Victory Tour and the training montage.  In the exchange, the Games take over the second and third act.
Praise the Lord, there’s no shaky cam!  The cinematography is crystal clear and the action doesn’t suffer from a frickton of jumpcuts, making it easy to see who is fighting who.
Just like in the first film, all of the actors are at the top of their game.  I have yet to see a bad Jennifer Lawrence performance.  She clearly understands the pragmatic, survivalistic Katniss and helps us to empathize with this person, as well. Haymitch Abernathy gets more opportunities to develop and evolve from just being the drunken, bitter mentor from the first flick.  Elizabeth Banks makes Effie Trinket more endearing, giving us reasons to believe her sympathy for these kids and not allowing her character to become flanderized.  I explain the definition of Flanderization in my review for the first Hunger Games film, so check it out if you’re curious.  As for Peeta, he serves more as a foil to Katniss.  She fights with her hands, he fights with his words.  She’s the hunter, he’s the baker.  She takes, he gives; she’s the head, he’s the heart…I think you get the idea.
My favorite scene in the entire movie is the climax at the lighting tree.  To call the way they filmed [SPOILER] Katniss shoots the arrow into the dome above amazing would be an understatement.  Jennifer Lawrence’s intense acting puts us in the moment with her while the cathedral-bell musical score accompanies the demise of the arena.  You get the feeling that director Francis Lawrence read this part of the book over and over again until he had a complete grasp of how the scene should be delivered on screen.

The Misses
Let’s talk about Prim, shall we?  Both the books and the movies have one major problem: Even though Prim is the reason Katniss enters the Games in the first place, she is nothing more than a plot device.  I understand why Katniss cares for Prim, but I myself do not care for Prim.  To be fair, the books do a little better in at least making her Katniss’ foil (Katniss is dark-haired, hardened and pragmatic, where Prim is the light-haired, soft optimist), but the movies barely touch on this. If you haven’t read the books, you know Prim as a nice girl whose important to Katniss.  She doesn’t have much to do in the series, so her significance is diluted. This will become a problem in Mockingjay Parts 1 & 2, but I can’t talk about that here because there’s a SPOILER involved.  [If you have read all three books, you know what the spoiler is, but I ask that you DO NOT reveal what it is in the comments on the CGB Facebook page.  Just be cool].
Speaking of plot device characters, let’s talk about Gale.  Both the books and the films give him only one purpose: To conflict with Katniss and Peeta’s fake-love thingamajig.  I like Liam Hemsworth as much as anyone else, but he has very little to do other than look rejected when Katniss turns him down and occasionally stand up to Peacekeepers.  Here’s the sad thing: Katniss and Gale actually have a very interesting backstory; they met when she was twelve and he was sixteen, and have been de facto brother and sister ever since.  However, the movies do little to explain this.  As a result, Gale feels very shoehorned at times.

I think Gary Ross stepping down and Francis Lawrence taking over was the best thing to ever happen for the Hunger Games film series.  Hunger Games: Catching Fire not only respects the original source material, but adds to it with nuanced performances, blood-pumping action and an epic climax that sets the stage for the grand finale: The Fall of the Capitol.

Saint Therese of Liseux, pray for us.