If you are like me and happen to have both liberal and conservative friends, you have heard heated—well, let’s call them— “discussions” about a woman in Kentucky named Kim Davis, the Rowan County Clerk who refused to issue marriage licenses to both gay and straight couples after the Supreme Court legalized same-sex marriage in all 50 states. Some call her a martyr. Others call her a fool.

I would like to argue that she is neither a martyr nor a fool.
She is simply wrong. 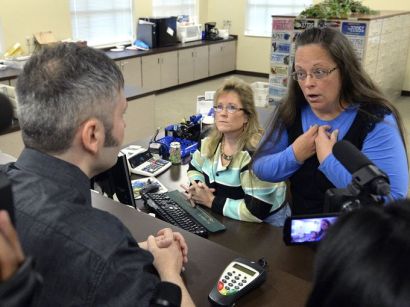 It all began on June 29th, 2015, just three days after the Supreme Court ruled that same-sex marriage was legal in all 50 states. Kim Davis, the Clerk of Rowan County, denied David Moore and David Ermold, a same-sex couple, a marriage license. She also withheld licenses from three heterosexual couples. In August federal district Judge David Bunning ordered Davis to issue licenses to all who applied, whether they be gay or straight. However, Davis’ defiance continued as she repeatedly turned away marriage license applicants regardless of sexual orientation. As a result, she was found in contempt and was taken into custody.

Some would question why an elected official would defy the law.

I never imagined a day like this would come, where I would be asked to violate a central teaching of Scripture and of Jesus Himself regarding marriage. To issue a marriage license which conflicts with God’s definition of marriage, with my name affixed to the certificate, would violate my conscience. It is not a light issue for me. It is a Heaven or Hell decision. For me it is a decision of obedience. I have no animosity toward anyone and harbor no ill will. To me this has never been a gay or lesbian issue. It is about marriage and God’s Word. – Kim Davis

I happen to be an English major, which means I have a responsibility to be accurate in my use of various words. In politics, it is not uncommon for loaded words to be tossed around by both sides with reckless abandon. In Kim Davis’ case, some well-meaning conservative people have proposed the idea that she is a martyr for the cause of religious liberty. This makes me cringe because “martyr” is not a term that should be used lightly.
How does the Catechism of the Catholic Church define martyrdom?

Martyrdom is the supreme witness given to the truth of the faith: it means bearing witness even unto death. The martyr bears witness to Christ who died and rose, to whom he is united by charity. He bears witness to the truth of the faith and of Christian doctrine. He endures death through an act of fortitude. ‘Let me become the food of the beasts, through whom it will be given me to reach God.’ (2473)

Just for the sake of emphasis, I will place a secular definition, as provided by Random House Dictionary, “A person who chooses to suffer death rather than renounce his or her religion.”

Based on these two definitions, I can say with certainty that Kim Davis does not qualify as a martyr. While going to jail was undoubtedly an unpleasant experience, she was not incarcerated for being a Christian. No one in a position of authority has threatened her life. She has not been coerced to renounce her religion. As an individual citizen, she has a right to disagree with the law. As an elected official, she does not have the right to go against it.

Let’s take another look at her quote, “It is not a light issue for me. It is a Heaven or Hell decision. For me it is a decision of obedience.” Her issue is that by affixing her name to these certificates, she is condoning what clearly goes against Scripture. However, she was not only denying licenses to homosexual couples, but to heterosexual couples, as well, in defiance of the law.

In Matthew 22, Jesus warned against anarchy by urging the Pharisees, “Render unto Caesar that which belongs to Caesar, and to God what belongs to God.” We, as private citizens, can and should hold true to our beliefs and stand firmly upon Christian doctrine. However, as citizens of this great country, we all must follow the law of the land.

Not A Fool, Just Wrong

Going back to definitions, Random House defines a fool as, “A silly or stupid person.” Ms. Davis is neither silly nor stupid. Her statement above is articulate and purposeful. She seems to be fully aware of the consequences of her actions, and has the resolve to see it through to the end. One might argue that she has become a puppet whose strings are being pulled by those who seek to benefit from her conservative stance, but it is clear that she is a true believer.

All that being said, she is simply wrong.

When she became the County Clerk, an elected position, this is what she signed up for. Her duty is to serve whoever walks through her doors, regardless of her personal convictions. When confronted with what she believed was a moral dilemma, she had a choice. That choice was not to deny what has been legally afforded to same sex couples of her county by the Supreme Court and thereby break the law. That choice was to step down from her position.

As a Catholic, I hold firm to what both Sacred Scripture and Sacred Tradition say about the sanctity of marriage, a sacramental bond, instituted by God. As an American citizen, I believe that no one is above the law, whether we agree with it or not. After all, Jesus said, “Render unto Caesar,” or in our case, the Supreme Court. And at the end of all this, I’m not sure if we can say who ‘won’ and who ‘lost’. In the realm of public policy, there will be many casualties and Mrs. Davis might have been one of them; but we ought not consider her a martyr for her faith. When an age of martyrdom becomes a reality for America’s Christians… you’ll know.

2 thoughts on “Is Kim Davis A Martyr? (Originally Published at The Catholic Response)– http://www.thecatholicresponse.us/is-kim-davis-a-martyr/”