I once wrote a story about a girl who enters another world and finds out that she is the Destined One, the only person who can save two worlds.  Along the way she meets characters whose dialogue consisted of backstory and exposition about the world.

I wrote this story when I was twelve-years old.

This is my review of Jupiter Ascending! 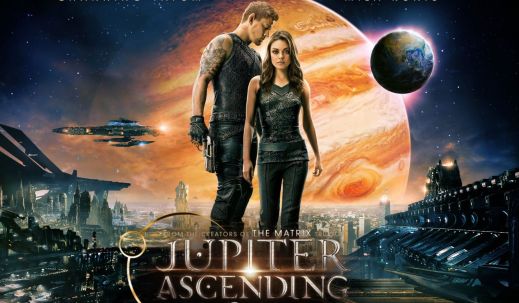 Jupiter Ascending tells the story of–well, to be honest–many things, but here’s the main plot: A young woman named Jupiter lives as a janitor with her family of Russian immigrants.  After surviving an assassination attempt on her life at a fertility clinic, she is rescued by Caine, a…(trying to keep a straight face) half-man, half-wolf splice hybrid person who tells her that she is the Queen of the Earth and must reclaim her throne from the Abrasax siblings named Balem, Titus and Kalique.  Along the way, Jupiter encounters other characters who are more interested in spouting out exposition and complicated backstory about their world than in being interesting characters with distinct personalities.

Do you have any idea how hard it was for me not to burst out laughing while typing the movie’s summary?  I only saw this movie once and I walked out of the theater after the first hour.
Have you ever seen a movie where it’s painfully obvious that key scenes are missing and the director(s) have no idea how to properly pace a story so that it flows smoothly?
Yeah, that’s basically Jupiter Ascending in a nutshell.
I took a lot of creative writing classes in high school and later in college.  In creative writing, one thing you learn that is there’s no right way to tell a story, but there are many wrong ways to do so.  Hence the best way to review Jupiter Ascending is by going over the “what-not-to-do’s” of storytelling and then explain how Jupiter Ascending breaks those guidelines.

1. Don’t let any backstory overshadow the current plot.  Jupiter Ascending puts less detail in basic character development and instead relies heavily on the needlessly convoluted history of its world.  As a result, all the exposition becomes a distraction from the movie’s central plot.

2. Create characters, not exposition-explaining pawns.  EVERY CHARACTER does nothing but monologue about how this worlds works.   Jupiter herself is just what I call a “window character,” someone who only exists as a stand-in for the audience as we learn about the film’s universe.  Window characters are fine as long as they have their own identity other than just being an observer.

3. Don’t introduce any ideas that you don’t plan on following up on. The main antagonist Balem (played by Eddie Redmayne) says, “I will harvest that planet tomorrow [Earth] before I let her [Jupiter] take it from me.” In other words, he’s going after Earth in 24 hours…and then that threat is never mentioned again. Actually Balem kind of disappears from the plot for a while.

4. Don’t drop any important characters. If you have a large cast of characters, make sure you can account for each of them.  All of the characters get rushed introductions and their personalities are so bland that it’s hard to care about any of them or what they’re going through.  As mentioned in #3, the main antagonist Balem is a major player for about 20 minutes, and then just disappears for a while because….unicorns!  The titular character Jupiter (played by Mila Kunas) is basically a damsel in distress and when she does start to develop as a character, it comes off as rushed and out-of-left-field.

If you take away anything from this review, let it be this: Please don’t name your character “Jupiter Jones.”
Just don’t.