The runtime of Pan’s Labyrinth is 119 minutes.  American Sniper is 132 minutes. Gone Girl is 149 minutes.  Meanwhile Courageous is 129 minutes long.  Of the four movies, only one felt less like 129 minutes and more like 129 hours.

This is my review of Courageous! 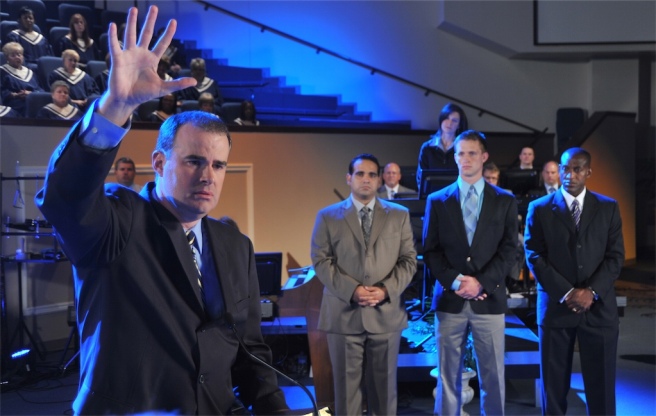 Courageous is the fourth movie from Sherwood Pictures (Flywheel, Facing the Giants, Fireproof) and it tells the story of four police officers coming together to be better fathers to their children…or so the back of the DVD box says.  More on that in a bit.

Let’s start with the good: All of the actors do a pretty good job.  Alex Kendrick is very convincing as a guy who loves his family, but is mostly a good-enough father, though his first few interactions with his son get a little frustrating.  There’s five storylines going on, but by far my favorite involves Robert Amaya’s character Javier Martinez.  He’s an honest, hardworking man who just got laid off and is trying to provide for his family.  His wife is very likable, and even the kids are endearing.  Javier’s story is very believable and when he does talk about God, it’s to keep his own head above water and ease his wife’s worries.  The dialogue sounds like it’s coming from the character and not part of an agenda.  Many times I said to myself, “Forget the other four characters, why can’t this movie be about Javier?”  You got an honorable father, a sweet family and a story about hard work and perseverance all in one storyline.  Seriously, Sherwood Pictures, Javier’s narrative alone is a wholesome family film practically gift-wrapped for you.

Unfortunately, Javier’s story is one of five, and sadly, that is the only good thing I have to say about Courageous.  The fatherhood aspect of the movie actually kind of drops in the second act, and is only shoehorned when characters talk about it, i.e. exposition.  The reason I brought up the running time of this movie is because Courageous is a really long movie.  Just like Aloha, this movie has the pacing of a snail crossing the street.  There is so much filler in this movie; scenes that could have (and should have) been cut out in the editing process cause the movie to lag. I watched this movie last night and I started it at exactly 8:45 pm.  The movie ended at 11:15 pm.  In that span of time, I took five walking breaks.  That’s right: Five times I had to pause the movie, get up and walk around.  I brought up the running time of Pan’s Labyrinth, American Sniper and Gone Girl.  I have sat through all three of those movies and I was rooted to my chair the entire time.  I understand that writing multiple storylines that are supposed to interconnect is a difficult formula to pull off.  I have no doubt that the makers of Courageous had their hearts in the right place, but they would have been better off trimming the fat and just focusing on either Javier or even Alex Kendrick’s character.

The message was honorable, but what Sherwood Pictures hasn’t learned yet is that a look between a husband and wife says more than ten lines of dialogue…in other words, less is more.

Saint Joseph, pray for us.