(Rides towards a dusty old town on a horse) How ya doin’ back there, Guardian Angel?
(Enter GUARDIAN ANGEL)
GUARDIAN ANGEL: No wonder you humans prefer cars over horses.
ME: Don’t tell that to equestrian enthusiasts.  Also, you do realize that you have wings and can just fly ahead of me, right?
GUARDIAN ANGEL: (Shrugs) CGB, you know that angels aren’t show-offs.
ME: Are you ever gonna take off your Deadpool mask?
GUARDIAN ANGEL: Sure, if you want to be blinded by my light.
(Screaming people are heard from a distance) (ME and GUARDIAN ANGEL see the dusty old town on fire)
ME: Why does this remind me of the first ten minutes of The Magnificent Seven?
GUARDIAN ANGEL: Probably because that’s how the movie opens.

This is my review of The Magnificent Seven! 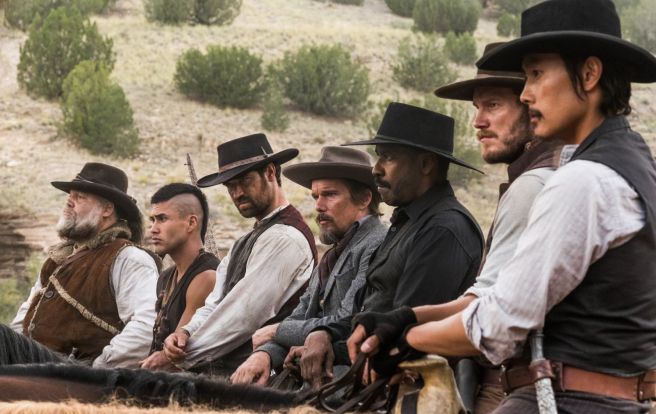 After her husband is murdered for standing up to greedy industrialist Bartholomew Bogue, Emma Cullen and the other desperate locals of Rose Creek seek the help of warrant officer Sam Chisolm (Denzel Washington), who then recruits a gambler named Joshua Faraday (Chris Pratt; just think Emmet from LEGO Movie and Starlord from Guardians of the Galaxy, or Emmet Starlord as I like to call him), a Confederate sharpshooter named Goodnight Robicheaux (Ethan Hawke), mountain man Jack Horne (Vincent D’Onofrio), the East Asian immigrant Billy Rocks (Byung-hun Lee), an outlaw simply known as Vasquez (Manuel Garcia-Rulfo) and the exiled Comanche Red Harvest (Martin Sensmeier) to take on Bogue and save Rose Creek.

The Hits
As a popcorn flick, this movie really works!  Much like Storks, the plot is very self-aware and focuses on being an entertaining shoot-em-up thrill ride.  This is the kind of standard plot that shouldn’t work, but the Magnificent Seven makes it work with a likable and dynamic cast, as well as fun action scenes where you can actually see what’s happening instead of being bombarded with constant shaky-cam.
Chris Pratt and Denzel Washington are just playing, well, Chris Pratt and Denzel Washington…and they are very good at it.  Washington brings his authoritative calm to the role of Sam Chisolm, asserting himself as a warrant officer who seeks the help the helpless and defend the voiceless.  Meanwhile Pratt plays Joshua Faraday with a slightly twisted yet playful charm.   The scene where he uses card tricks to get out of a situation involving two brothers who want to kill him is incredibly fun and even a tad suspenseful to watch.
While the marketing made it seem that this was going to be a Chris Pratt-Denzel-Washington vehicle, the final product makes use of the other cast members.  Ethan Hawke is given a compelling character arch as a Confederate soldier with PTSD, while Vincent D’Onofrio is absolutely fun to watch without overstaying his enthusiastic welcome.  The action sequences where all seven of them fight antagonists serve as showcases for each character’s fighting style, allowing distinction between protagonists so that they don’t all just blend into dull and boring pawns with muscle.  I definitely like the camaraderie that forms between the seven men.   As the movies goes on, a brotherhood develops and you really feel that these guys go from fighting as reluctant teammates to working together as willing allies.
I also appreciate that the female lead played by Haley Bennett doesn’t fall for one of the Magnificent Seven members.  Given that her husband, played by Matt Bomer, dies in the first fifteen minutes, I think it would’ve been out of place for her and even forced to have her fall head-over-heels for Pratt or Washington.

GUARDIAN ANGEL: CGB, get behind me!
ME: Wait, what?  (Grabbed by GUARDIAN ANGEL and thrust behind his large wings) Holy cow, you’re taller than I thought.
GUARDIAN ANGEL: You’re just now realizing that?
ME: Well, gee, I’m sorry I don’t have superior intellect like you angels.
GUARDIAN ANGEL: (Playful smirk) Stay down, but try to look past my wing.
ME: (Carefully looks up and sees a man in a white suit standing among the flames) Yeeesh, who the heck is that dude?
GUARDIAN ANGEL: That is White Suit.
ME: Is that his real name?
GUARDIAN ANGEL: No, but he comes from the netherworld, so I’d rather not say his real name.
ME: (Swallows) Gotcha.
GUARDIAN ANGEL: I know for a fact that he assisted Amanda Waller in capturing you, MsOWrites, Catholic N00B, Rosalie Contrite and Surrender the Brownies.
ME: That explains how Waller and Rick Flag found my house!
GUARDIAN ANGEL: Correct.  (Holds up two katanas)
ME: Wait, I thought you gave me one of your katanas.
GUARDIAN ANGEL: I did.  That doesn’t mean I don’t have an unlimited supply.  Listen, go to that conveniently-empty house and focus on the review.  I’ll see if we can cross through this town without catching White Suit’s attention.
ME: You do realize that I can fight, right?  I fought the Joker in the Suicide Squad review.
GUARDIAN ANGEL: Only to have Catholic N00b finish him off.  Case in point: You’re not ready to fight off fallen angels.  To be fair, no human is.
ME: That makes sense.  All right, I’ll comply.  (Heads to conveniently-empty house and sits on beat-up couch)  So while I wait for my guardian angel to find a safer way out of this town, I guess I have some time to go over the misses of Magnificent Seven.

The Misses
At times, the action can be hard to see, primarily in the climax.  There’s a complex plan formed to ambush Bartholomew Bogue and his henchmen and, because some of the Magnificent Seven members slightly resemble one another, it gets a bit hard to tell who’s who when they’re all bloodied with dirt-caked faces.
I’ve never been a fan of Westerns (the genre just have never been compelling to me) and this movie certainly didn’t change my mind.  As fun as this movie is, it’s pretty forgettable a few days after you’ve seen it.  Even though the characters have great chemistry, the majority of them are pretty two-dimensional with the exception of Ethan Hawke’s character.  Otherwise, as an afternoon flick, it’s serviceable nonetheless.

(Enter WHITE SUIT, a tall and lean man in a white suit with a white hat covering his face and large ashen wings)
WHITE SUIT: Hello, Catholic Girl Bloggin’.
ME: (Gasps) What the?  How did you find me?
WHITE SUIT: I have your guardian angel surrounded just outside.  It probably isn’t wise for you to hide in a place known as “conveniently-empty house”.
ME: What, is there is neon-colored sign hanging outside?
WHITE SUIT: See for yourself.
ME: (Looks out window and sees neon-lit sign that reads, “CONVENIENTLY-EMPTY HOUSE“)  Well, that does not help me at all.  (Backs away from WHITE SUIT)
WHITE SUIT: Oh, there’s nothing to worry about, my dear.  I actually come to help you.
ME: Yeah, you fallen angels are about as helpful as a brick to the face.
WHITE SUIT: Last time I checked, you currently have 1,666 likes on the blog’s FB page.
ME: And of course it just had to include 666.
WHITE SUIT: I have some tips and tricks to make that number skyrocket.  I can help you to propel your blog to instant fame…
ME: Oh, no, I’m not making any blood pacts!
WHITE SUIT: Don’t worry, I don’t require blood pacts.
ME: (Whips out angelic katana) Uh huh, sure you don’t….(holds it up between my eyes)
WHITE SUIT: (sinister chuckle) I am simply here to make you an offer you can’t refuse.
ME: Bwahahahaha!
WHITE SUIT: (Gives quizzical look)
ME: Are you seriously trying to intimidate me by quoting the Godfather?  Dude, my family and I watch that at least once a year!  (Goes on a tangent) Some years we watch just the first film and the whole trilogy during other years, including the crummy third film…
WHITE SUIT: (whips out a sword)
ME: (Swallows) You do realize that you fallen angels can’t physically hurt us humans, right?
WHITE SUIT: (Shrugs)  But we can frighten and intimidate.  (Sinister grin) Submit or suffer. What’ll it be, CGB?
ME: (Grips tightly to the katana) A Christian I am and a Christian I shall remain.
WHITE SUIT: (Raises eyebrow) Very well, it’s your torment.  (Charges at me)
ME: (Holds up katana, bracing for impact) (Looks down and sees Mother Teresa medal around my neck) Hey, jerkface!  (Talks deep breath) Mother Teresa!
WHITE SUIT: (Sword flings out of his hand) (collapses to the ground)  Argh!  The one in white!
ME: (Begins to approach) Saint Gemma Galgani!
WHITE SUIT: (Writhes in pain) Ahhhhh!  The one in black!
ME: (Smiles with confidence) Blessed Imelda Lambertini, Blessed Chiara Badano!
WHITE SUIT: (Curls up in fetal position) The holy girls!
ME: (Begins to approach) Saint Jose Sanchez del Rio!
WHITE SUIT: (Rocks back and forth) (Snarls with flaming eyes) How DARE you invoke the boy martyr!
ME: (Raises katana) Pope John Paul II!
WHITE SUIT: (Thrashes wildly on the floor) (Scratches his own face with his claws)  NO!  The one who ruined our plans!
ME: Saint Michael, Saint Monica, Padre Pio, MOTHER MARY!  (Plunges the katana into his chest)
WHITE SUIT: (Tries to grab me with his claws)
GUARDIAN ANGEL: CGB, duck!
ME: (Takes cover by a table)
GUARDIAN ANGEL: (finishes off WHITE SUIT with his own katanas)  (A lone white hat is all that remains)
ME: Is he gone?
GUARDIAN ANGEL: For the time being, yes.  (Pulls katanas in his sheaths) I’m glad you invoked the names of saints instead of taking him on with your own strength.
ME: (Looks at Mother Teresa medal) I don’t remember wearing this earlier.
GUARDIAN ANGEL: (Smirks lovingly) I figured she’d be the best person to give you courage. (Looks around dishelved house) So any closing thoughts on the Magnificent Seven before we take off?
ME: Well…

The Magnificent Seven is a fun and engaging popcorn flick.  Given that the Western genre itself can be a hit or miss (with more misses than hits), the Magnificent Seven is definitely one of the few gems the genre has to offer.  Although it is, sadly, easy to forget about after a few days, for the time you’re watching it you’ll have a pretty good time.  Denzel Washington and Chris Pratt are a selling point, but they allow others to share in the star-studded spotlight, which is a commendable feat.  A cast with believable and likable chemistry, some impressive set pieces and a self-awareness that keeps it from becoming needly dark and grim makes the Magnificent Seven a modern Western worth checking out.

GUARDIAN ANGEL: (Face becomes stern as his wings raise)
ME: What’s wrong?
GUARDIAN ANGEL: I’m going to have to knock you out.
ME: Why?
GUARDIAN ANGEL: Something worse than White Suit is headed this way.  (Wraps his wings around me, enveloping me)
ME: (Startled) What are you–
GUARDIAN ANGEL: Don’t worry, this is like being wrapped in a glow-in-the-dark blanket.
ME: (Begins to feel sleepy) (Goes under as the earth shakes beneath my feet.

(Enter MsOWrites)
MsOWrites: CGB?  CGB, can you hear me?
ME: (feels icy water splash on my face) (jumps awake) MsOWrites?!  Hey, where are we? (Looks around to see that we are on a beach)
MsOWrites: Listen, Catholic bloggers are in trouble again, so we’re all seeking refuge at Miss Peregrine’s?
ME: That school for peculiar kids?
MsOWrites: There’s a new world coming, and it’s just around the bend.
ME: Oh, boy…