As the election results have shown us, life can be stranger than fiction.

This is my review of Doctor Strange! 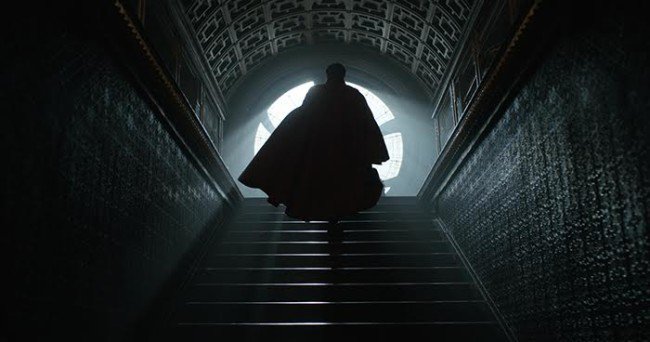 Doctor Stephen Strange (Benedict Cumberbatch) is a successful but arrogant surgeon whose career ends after a terrible car accident practically destroys his hands.  After speaking with a formerly-paralyzed man who has since been completely healed, Doctor Strange journeys to Kathmandu, Nepal, where he meets the Ancient One (Tilda Swinton) and finds himself getting swooped in to a mystical battle with dark forces led by the sinister Kaecilius (Mads Mikkelsen).

The Hits
Holy cow, the visuals are INCREDIBLE!  The battle sequences are truly a sight to behold.  I love the idea that these mystic warriors actually bend time and physical space in order to do battle.  The reality-bending is just so COOL!  I like how it’s not all shaky-cam and impossible to see what’s going on.  The spells cast are bright and colorful, the fight choreography is smooth and well-paced, and the battles themselves are brimming with imagination.  This is one of the rare films where the 3D enhances the experience and isn’t just a nauseating gimmick.  You’ll still enjoy it in 2D, but if you are thinking of seeing it in 3D, then DO IT!  Of course, if you are concerned about cyber sickness, then here’s my review of The Walk, where I offer tips and tricks on how to prevent cyber sickness:  https://catholicgirlbloggin.net/2015/10/11/cgb-review-of-the-walk-2015/
Benedict Cumberbatch has yet to disappoint me.  I think it’s been established that you could cast this guy as a lampshade and he would still give a great performance.  While the role of Stephen Strange himself is not entirely compelling, Cumberbatch has the time of his life with this character.  He makes Stephen Strange arrogant but likable; his sense of self-importance doesn’t harm anyone, it only makes it satisfying when the movie allows him to get his humbling comeuppance.  The movie has an awesome moral about humbling yourself for something greater, which is Christianity in a nutshell.
Tilda Swinton is another actor who can do no wrong (in movies, I mean).  She brings a complexity to her character The Ancient One.  Yeah, she’s basically a tall, female Yoda, but Swinton gives a grounded performance that enables her to make the role her own.
I’m sorry, I just can’t get over how much I LOVE the mythology of this world!  There’s a line where one character says (I’m going to paraphrase here), “The Avengers protect the physical world, while we fight off more mystical dangers.”  It made me think of the battles that take place in the spiritual realm where angels and saints fight for us against sinister forces.  In our secular world, it’s refreshing to see any big budget film embrace the idea that there is an invisible reality within our physical world where two opposing forces do battle for our souls.   Also I appreciate how Kaecilius is basically a discount Lucifer (a powerful being who becomes drunk with pride, wants more power and causes division in his wake); yeah, the similarities are there.
I don’t want to go into spoilers, but I’ll just say that how Doctor Strange defeats the main antagonist is quite clever and fun to watch.

The Misses
The relationship between Doctor Strange and his (ex-girlfriend-ish?) Christine Palmer is underdeveloped.  I’m glad that it’s a mostly platonic relationship, but they don’t have enough scenes together where we get to care for them as a couple.
Okay, so the Ancient One runs this whole mystic, inter-dimensional operation with Mordo, Wong and…a handful of other people?  Yeah, even though we do see other sorcerers training, when the actual fighting starts, we only see Ancient One, Mordo and maybe two other unnamed characters doing battle.  I kind of wish both the Ancient One’s group and Kaecilius’ gang had more members.

Overall, I really love Doctor Strange!  Benedict Cumberbatch alone makes it a must-see, but the creative and energetic battle sequences and the clever use of 3D makes even more worthwhile.  Like Kubo and the Two Strings, the story and the visuals enable Doctor Strange to stand tall and proud in the Marvel Cinematic Universe.

Saint Timothy, pray for us.

You’ll need to talk about saving up for therapy after this movie.

This is my review of We Need to Talk about Kevin! 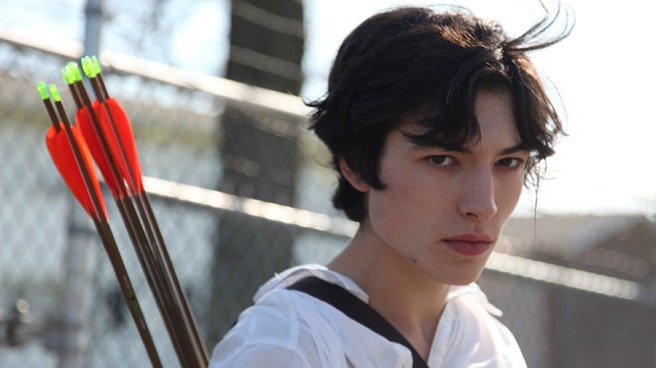 Based on the 2003 novel by Lionel Shriver, We Need to Talk about Kevin chronicles the miserable existence of Eva Khatchadourian, the mother of the troubled titular character Kevin, the culprit of a heinous school massacre.
My good friend and fellow blogger Pink Haired Papist asked me to take a look at this film and in some ways, I’m glad that I did.  In other ways, I wish that I hadn’t.

The Hits
There’s a term in literature and cinema called “Show, Don’t Tell.”  Basically it’s when you allow the reader/audience to experience the story through the actions of the characters and (in the case of film) the visuals instead of long-winded expositional spiels.  Within the first ten minutes of the film, we learn everything we need to know about Eva’s desperate conditions and it is all done without one word of expositional dialogue.
Speaking of Eva, Tilda Swinton broke my heart with her meek and vulnerable performance as a former travel writer turned domesticated housewife who found herself at the mercy of her vicious son and must now endure the hostility of those who lost their children in the massacre Kevin caused.  Her expressive face and de-glamorized appearance spell out the gravity of her despairing situation.  I give a lot of credit to both Lionel Shriver and director Lynne Ramsay for telling this story from the perspective of the perpetrator’s mother, given that this can be a risky move when telling a narrative that involves the killing of minors.  The subject matter is handled with the sensitivity and grace needed for this kind of story.
Something that I really appreciate is that the movie allows Eva to have moments of good happen to her.  In the opening, we see that her rundown house has been vandalized.  She then goes to apply for a job at a dingy travel agency.  The employees know that she is the mother of the boy who murdered his classmates, so they greet her with judgmental glances.  A novice storyteller would have had Eva turned down for the job to show how bad her life is and doing this would give the sense that there is no trust in the audience’s ability to figure that out, but the tactful script has her hired by the agency instead.  Her pitiful house, mediocre car and the vandalism alone tell us that Eva suffers daily, so a small victory like being hired gives the audience a brief reprieve from the misery.  It also makes the viewer relieved that for once, something good has happened, hence allowing them to step into the shoes of our main character.  In the very next scene, Eva is confronted and slapped by a mother whose child was killed by Kevin.  Seconds later, a man approaches Eva and offers to call the police to report the mother’s assault, an offer that Eva declines.  I really like that not all the townspeople are despicable.  Yes, mob mentality can happen in any neighborhood, but there are logical, good-natured people out there and I applaud the movie for recognizing this fact.

The Misses
Yes, we do need to talk about Kevin; specifically about Ezra Miller, the guy who plays Kevin.  No, he does not give a bad performance.  Rather, while he does certainly look the part of a sociopathic teenager, he doesn’t have much to work with.  Honestly, I think Jasper Newell, the boy who brilliantly plays Kevin as a child has a lot more to do than Miller does.  Given that he is the title character, I feel that Ezra Miller’s role was underwritten.
If the Revenant is visually brutal, then We Need to Talk about Kevin is emotionally brutal.  This is not a pleasant movie.  The scenes that chronicle the toxic relationship between Eva and Kevin are painful to watch.  When Eva comes home to [SPOILER] find her husband and young daughter dead, I had to look away.
I never want to deter anyone from watching a fantastic film, but as the old adage goes, “Knowledge is power.”  I strongly recommend looking up We Need to Talk about Kevin’s IMDB page and clicking on the Parental Guide segment, which gives a detailed rundown of the film’s content.  If you know what you’re in for, you can decide for yourself if this is a cinematic journey you want to embark on.

We Need to Talk about Kevin is a draining but exceptionally crafted film.  Tilda Swinton’s wounded performance is Oscar-worthy, the cinematography and editing are some of the best I’ve seen in a while, and the handling of dark topics such as a dysfunctional mother-son relationship and a school massacre is commendable.

By the way, if you like Catholicism, feminism and wine, be sure to check out my friend Pink Haired Papist’s blog at http://pinkhairedpapist.blogspot.com/

Saint Rita of Cascia, pray for us.