Well, someone REALLY liked “The Last of Us” and decided to make a movie out of it, but starring Wolverine…

…And I’m okay with that.

This is my review of Logan! 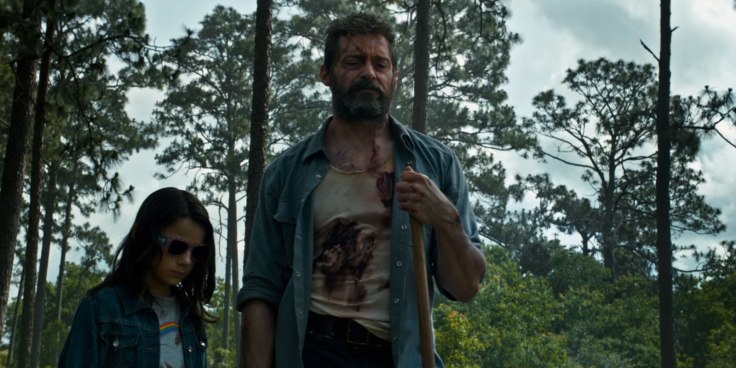 The year is 2029.  James Howlett, also known as Logan–and also known as Wolverine–is a weary, beaten-down, old mutant who is just barely getting by with booze in hand and a desire for the end of his pain.  He is a limo driver by day and caring for Professor X by night.  Logan’s miserable existence is chaotically interrupted when a young mutant named Laura Kinney (Dafne Keen) shows up on his doorstep with a ruthless agency on the hunt for her and others like her.  With one mutant Caliban in captivity and Charles Xavier being senile and fading, it’s ultimately up to Logan to get Laura to a shelter where she will be kept company by (quite possibly) the next generation of mutants.

The Hits
The action in this film is quite spectacular to behold.  Gripping, fast-paced and relentlessly violent, there is an underlining catharsis to each stab and shot fired.  You can feel the excruciating pain that runs through Wolverine’s hands every time he unleashes his steel claws.   The oppression of violence from the antagonists presses you down and forces you to hold your breath as you pray for the start of a new scene.
So this is Hugh Jackman’s final time playing the Wolverine and, by golly, he gives this performance his all.  Logan is a broken man; Weakened yet never pitiful, struck down but not destroyed, just the act of living takes every ounce of strength that he can muster.  He has seen it all, heard it all and lived through every conceivable disaster you can think of; nothing is new to him and nothing more can further damage an already irreparable man.  I really appreciate how he never gets too sappy or sentimental.  His care for Laura and Professor X is displayed through his actions, never his attitude or words.  He’s like a father who isn’t very outwardly affectionate, but shows his kids he cares for them just by working hard for them.  In the same vein as Masey McClain’s performance in “I’m Not Ashamed,” Hugh Jackman’s portrayal of Wolverine is the glue that holds this movie together, the mythological Atlas who holds the weight of the narrative on his
One review I read described this film as “unexpectedly moving” and quite frankly, I concur.  The heart of this story are Logan’s withering relationships; his fragmented rapport with Professor X, his tension with Caliban and his resistance to empathy for Laura are fascinating and strangely moving to watch.  In addition, Patrick Stewart gives a very powerful monologue along with an endearing, while Dafne Keen’s Laura is a force to be reckoned with.  She’s essentially a young, female version of Logan, but is surprisingly both hardened and yet hopeful all at the same time.  She is a child soldier who somehow maintains a believable amount of innocence that allows her to experience the world around her with fresh eyes.

The Misses
Much like the first Hunger Games movie, this movie does involve violence against children and violence being committed by children, in particular by Laura herself.  This can be very unnerving to watch, especially if you have and/or work with children.  Even the fact that they are mutant children who are more than capable of protecting themselves doesn’t make the violence against them or the violence they are engaging in any less disturbing.
A few days ago, one of the friends I saw this movie with texted me to ask, “…are you okay with excessive blood and gore?  From what I’ve heard, this [Logan] is supposed to be more graphic than Deadpool?”  To which I responded with, “M.P., my favorite movie of all time is Pan’s Labyrinth and that movie features a guy [Captain Vidal] getting stabbed in the shoulder, chest and THEN having his cheek sliced from the inside!  I’ll be fine.”  As my friend M.P. said, this movie has some seriously excessive blood and gore.  Viewers who are squeamish and sensitive to gore might want to think twice before buying a ticket.

Overall Logan turned out to be much better than I expected.  In fact, the more I think about this movie, the more compelling it becomes and I almost want to see it again.  Logan can come off as nihilistic, but never goes into full-blown “there’s no point to this” despair.  This is a dreary, pragmatic film held together by one shattered man and his fragmented relationships, a grounded comic book adaptation with grit and style that is bound to stay with you long after the credits roll.  Whether you are a fan of the X-Men franchise or an outsider looking in, the multifaceted character of James “Logan” Howlett, aka the Wolverine, goes out with both a blood-soaked bang and a curdling whimper.

Blessed Laura Vicuna, pray for us.

Me before Pan: “Okay, Lord, I’m going to keep an open mind.  Maybe Pan will be an offbeat fairy tale that I end up liking.”
Me during Pan: “WHAT THE FRICK AM I LOOKING AT?!”

This is my review of Pan…(irritable sigh)

Pan is the prequel to J.M Barrie’s Peter Pan.  In this version, Peter (Levi Miller) starts out as a little boy living in an orphanage who gets snatched away by pirates and ends up in Neverland, where he must go up against Blackbeard (Hugh Jackman) after it is discovered that Peter can fly because–chosen one–and from there, Peter teams up with James Hook (Garrett Hedlund) and Tiger Lily (Rooney Mara) to discover his true destiny as the flying boy who will save the Natives and the fairies from the tyrannical Blackbeard and the pirates.
I just took an Advil because this movie gave me a migraine.  I am legitimately ticked off because the trailer for this movie looked so enchanting.  Sadly, the final product is anything but magical.  This movie has no idea what it wants to be.  It is so tone-deaf that I was never sure when I was supposed to take a scene seriously.
Alas, let’s just get through the very few Hits before I commence into Super Saiyan rant-mode.
By the way, ten brownie points are yours if you know what a “Super Saiyan” is.

The Hits
To be fair, there is a good story somewhere in this bloated mess of a film.  The world creation is certainly not lacking in imagination.  The locations are gorgeous to look at and I really wish that the movie had taken the time to give Neverland its own identity outside of being a pretty generic CGI backdrop.
The idea of establishing Peter Pan and Captain Hook as friends is interesting, and the banter between them did get a few chuckles out of me.
I do like the concept of Peter being the son of a fairy prince and a human woman, and that Tiger Lily has a connection with Peter’s mother.  Also kudos to the screenwriter for making Peter’s mother a pro-fairy warrior.  Deceased mother characters shouldn’t just be dead nice ladies.
The only scenes that had me invested were the scenes between Peter and Blackbeard.  Levi Miller and Hugh Jackman do have a believable dynamic as enemies.  I always appreciate when a hero and a villain are in the same room, conversing with each other.
Levi Miller is the only person who I sympathetized with.  He seems to understand his role and does his very best to be the grounded force of his strange surroundings.  I do hope that he gets more work and ends up in better movies because there is a lot of promise with him.
It is always tragic when incompentent direction buries a potentionally engaging story.

The Misses
All right, the gloves are coming off.  Let’s go.
(Commencing rant mode) This should have been called “Indecision: The Movie.”  It is painfully obvious that director Joe Wright was second guessing every single story decision he made during production.  Except for Levi Miller, the adult actors are evidence of this.
It’s never a good sign when you can tell that an actor is confused about who they’re supposed to be throughout the film.  I think Mr. Wright first told Hugh Jackman to be menancing, but then right before the camera rolled, he said, “On second thought, Mr. Jackman, Blackbeard should be a comedic villain.  Yeah, that’s it.” But THEN Mr. Wright changed his mind again and told Jackman to be a scary dude.  As a result, Hugh Jackman’s Blackbeard switches back and forth from quirky villain to menancing foe every five minutes.  Actually, now that I think about it, Jackman’s performance is inconsistent; he overacts in some scenes and underacts in others.
The secret to writing an offbeat villain is to write he/she as either a scary person who can be funny or as a charming individual with a twisted personality. Attempting to be both sucks away the tension between the villain and the protagonist.   If I’m not afraid of the villain, why should I care about the hero?
The second victim of Joe Wright’s indecision is Garrett Hedlund.  It’s like Mr. Wright couldn’t decide if he wanted James Hook to be a ripoff of Indiana Jones or Hans Solo, so he just said to Hedlund, “Just be both and talk through your teeth a lot because–potatoes!”  The character of James Hook feels so unnatural to the story because he bulges his eyes out, widens his facial expressions and talks through his teeth.  It gets to the point where he is so unrealistic that his appearance in any scene feels shoehorned.  His “romance” with Tiger Lily (Rooney Mara) is painful to watch because Hedlund and Mara have zero chemistry.
The action sequences are horrendously edited.  Thanks to a frickton of jumpcuts, I could barely follow what was going on or who was fighting who.   The CGI mermaids and the Neverbirds look embarrassingly fake.  The musical score plays during the wrong sequences.  I rarely say this, but this is the pinnacle of style over substance.
Finally, if you’re a fan of Saint Catherine Laboure or just the religious life in general (or both), you will be ticked at this movie because the nuns who run Peter’s orphanage are Catherine Laboure nuns with no personalities other than being offensive caricatures.  I know that they are Catherine Laboure nuns because of the habits they wear.
This is Catherine, by the way.

It just so happens that Catherine Laboure is my favorite out of all the Saint Catherines, so I was already annoyed within the first five minutes of the movie. Even secular movie critics don’t like the portrayal of the nuns in this flick!

Whenever I’m writing a story or revising an essay before the due date, I’ll run it by my Mother to get a second opinion.  If I propose a last minute change that doesn’t make sense or second guess a key element of my writing project, my Mom will set me straight and advise me to stick with and improve the ideas that are already in place.
Pan is the best example of why film directors should have their mothers on set.  The tone is inconsistent, the actors are confused about who they’re supposed to be, and the visuals overtake character growth and interaction.

Saint Catherine Laboure, you deserve much better treatment.  Also, pray for us.