There is a major spoiler about one of the characters in this review, so SPOILER AHEAD.

This is my review of Gone Girl! 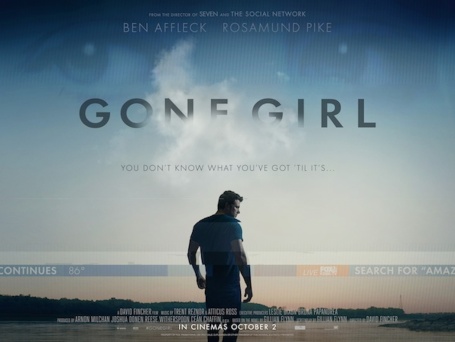 I love Gillian Flynn’s novel “Gone Girl,” which this movie was based on.  I’ve read that book so many times and I’m sure I’ll be reading it again real soon.  Before I ramble on and on about how awesome the book is, let’s talk about the movie.
On the morning of Nick and Amy Dunne’s 5th wedding anniversary, Nick discovers that Amy has disappeared.  From there, a nationwide search for her is launched and Nick must deal with Detective Rhonda Boney and Detective Jim Gilpin, who begin to suspect that he [Nick] murdered his wife [Amy].  While that’s going on, we get to look into Amy’s diary, where the Dunnes’ troubled marriage is chronicled.

As a fan of the book, I am happy to say that this is one of the most faithful book-to-film adaptations that I have seen in a while.

The Hits
David Fincher’s use of a cool color palate, an eerie musical score that sounds like someone is just around the corner, waiting to get you (we have Atticus Ross to thank for that), and smooth camera pans fit this movie like a glove.  In the writing category, I have great respect for Gillian Flynn, who wrote the screenplay for the film.  I’m sure it wasn’t easy deciding which things to cut and which story elements to keep, but I can tell that she put the time and effort to making sure that the film matches her vision as accurately as possible.  There’s an old adage, “If you want something done right, do it yourself.”
Rosamund Pike was born to play Amy Elliott Dunne, the most disturbing femme fatale in recent memory.   This icy Hitchcockian blond with a haunting voice that would make anybody look over their shoulder if they heard her speak is calculating, methodical and armed with 20/20 foresight.  She thinks of everything and spares no one in her path; Satan asks her for advice.  She will ruin you and then reassemble you to fit her vision.  She doesn’t need to point a gun to hurt you; all she has to do is know you.   That is how she begins to destroy you.
Ben Affleck not only understands Nick Dunne, but he even does a better job at representing Nick than the book.  He exceeded all expectation with his portrayal of a lazy, pathetic, country-boy adulterer who avoids any and all conflict, even if it’s staring him right in the face.
Tyler Perry gives a surprisingly stellar performance as the cocky slimeball Tanner Bolt, Carrie Coon is grounded and down-to-earth as Margo “Go” Dunne, and although he seems a bit miscast, Neil Patrick Harris does a good job as the creepy Desi Collings.

A Word of Caution
Are you discerning married life?  Is your own marriage in a rough patch?   Are you unsure or even suspicious of the institution of marriage?  If you answered “yes” to any of these questions, then this movie might get under your skin.  Both the movie and especially the book lean towards an anti-marriage point of view.  In both versions, married characters are either miserable or idiotic, Amy Dunne makes plenty of “don’t-get-married” statements, and the Dunnes’ marriage freefalls from passionate to insufferable.
That all being said, do keep in mind that this is a work of fiction, and Gillian Flynn herself is a married woman.  She even gives her husband a glowing acknowledgment at the end of the book.

Overall Gone Girl is one of the best thrillers in recent years that will quite literally keep you guessing until its gut-wrenching conclusion.