Brock Turner has been released.

I’m sure you already know who he is, but just for the sake of emphasis, Brock Turner is the former Stanford University swimmer who raped an intoxicated and unconscious woman behind a dumpster.  Today he has been allowed back out into the world for “good behavior.”

We live in a broken world.  The fact that we live in a society where if a woman reports that she has been raped she faces the possibility of having her personal history questioned, her motivations suspected and her attacker not held fully accountable, is just one of the many injustices that illustrate the broken nature of our times.

As sickening as it is, it shouldn’t come as a surprise when evil wins every now and then. The devil knows how to ensure that his dirty work is done without anyone batting an eye until it is too late to put a stop to it.  It doesn’t help that our culture gets outraged over social injustices for a few weeks only to forget about it as everyone returns to their daily routine.  Evil has its hour when good people raise their voices and do nothing.

Just behind my laptop is a framed picture of Mother Teresa.  I glanced up at it as I was typing this, but after a while I closed my laptop and just stared at it for a few minutes.  My eyes focused on her tender gaze and folded hands, her humble posture and deep compassion pooled in her eyes.
That is when it hit me.

Mother Teresa will be canonized this Sunday.

Mother Teresa’s courageous humilty is the antithesis of Brock Turner’s cowardly selfishness.  The devil may jump for joy at the release of a rapist, but he burns with rage at Heaven’s rejoicing for the canonization of a heroic woman.

In the end, justice will prevail, but in a very different way.

Brock Turner has been disgraced in the eyes of the public, while Heaven and Earth honor Mother Teresa’s self-sacrificial life.

Brock Turner is free from prison bars, but wherever he goes, people will look at him and know.  In the same way that Cain was cursed to walk on earth as a fugitive and vagabond, Brock Turner will wear his crime like a scarlet letter.
Mother Teresa suffered the spiritual darkness of feeling abandoned by God, but she now walks among the angels and the saints in the Heavenly court.   Surrendering herself to God’s plan, dedicating herself to the service of the poor and destitute, all she did was give, and in the end she received the Crown of Life.

Saint Mother Teresa of Calcutta, pray for us and for the conversion of Brock Turner. 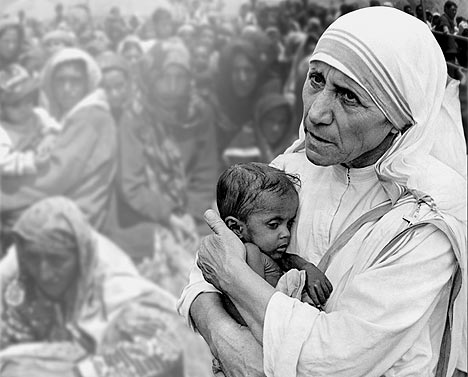 “Christ says: I know you through and through – I know everything about you.  The very hairs of your head I have numbered.  Nothing in your life is unimportant to me, I have followed you through the years, and I have always loved you – even in your wanderings.  I know every one of your problems. I know your need and your worries. And yes, I know all your sins. But I tell you again that I love you – not for what you have or haven’t done – I love you for you, for the beauty and dignity my Father gave you by creating you in his own image.”
―Saint Mother Teresa of Calcutta